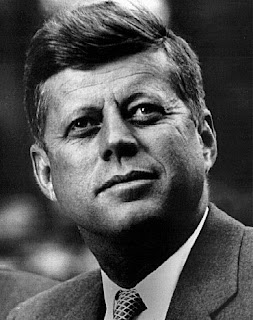 My parents loved Jack Kennedy. In the late 60s I asked about a picture of him, similar to the one above, my mom kept on her desk. She showed me the letter that came with it--a 1963 thank you note from Jackie Kennedy responding to my parents' condolences.

My parents would be pleased to see that Kennedy is back in our consciousness. Chris Mathews' recently released, Jack Kennedy: Elusive Hero, is a best seller (review here). Jacqueline Kennedy is also in print with Historic Conversations (review here). Even Stephen King has contributed to the Kennedy revival with a novel, 11/22/63.

Perhaps the best biography of Kennedy is Robert Dallek's An Unfinished Life (review here). I believe that this book is the standard that all other books on Kennedy should be measured against. Dallek's encyclopedic work incorporates the new information of Kennedy's medical problems as well as objectively analyzing the political struggles of  Kennedy's 35 months in office . He concludes that the Kennedy presidency was unfinished, but had great potential in civil rights, space exploration, outreach to the third world (through the Peace Corps), and a more flexible foreign policy. The American people have consistently admired Kennedy's energy and creativity, giving his presidency much higher marks than the reviews of historians. Newly sworn in President Lyndon Johnson realized many of these Kennedy programs, especially civil rights legislation. Unfortunately, Johnson also deepened our involvement in Vietnam.

Critic Ross Douthat cannot understand why Kennedy was beloved by the American people. In the Enduring Cult of Kennedy he writes about three myths of the Kennedy presidency. Two of these myths are of interest here. Douthat writes:

The first premise is that Kennedy was a very good president, and might have been a great one if he’d lived....In reality, the kindest interpretation of Kennedy’s presidency is that he was a mediocrity whose death left his final grade as “incomplete.” The harsher view would deem him a near disaster — ineffective in domestic policy, evasive on civil rights and a serial blunderer in foreign policy, who barely avoided a nuclear war that his own brinksmanship had pushed us toward. (And the latter judgment doesn’t even take account of the medical problems that arguably made him unfit for the presidency, or the adulteries that eclipsed Bill Clinton’s for sheer recklessness.)

I find this analysis unfair. It is true that most historians do not rank Kennedy with the greatest of presidents. Yet, he was only partially responsible for the Bay of Pigs fiasco, since it was planned by the Eisenhower administration and  his response to the Cuban Missile Crisis was masterful. We now know that any other military response would have led to Armageddon. As stated earlier, Kennedy did make a small amount of progress on civil rights legislation, though the issue was not nearly as important to him as it was to his vice president. The economy recovered from recession after Kennedy's tax cuts. He would have won reelection easily.

Next, Douthat writes: "The second false premise is that Kennedy would have kept us out of Vietnam."

We will never know. Kennedy escalated Eisenhower's policy, but the number of troops (or "advisers") he sent to Vietnam was still small. Kennedy wanted to show the world that communism could be opposed with other means besides the heavy club of nuclear deterrence and massive retaliation. He was willing to use conventional forces instead of taking the world to the brink with nuclear weapons. He also had a healthy distrust of military brass, dating back from his own WWII experiences, Bay of Pigs, and the Cuban Missile Crisis. He would have been less likely to act like Johnson--a president without military experience and with less confidence in standing up to Kennedy's previous advisers and the Joint Chiefs.

Leafing through Perspectives: Readings on American History in the 20th Century, (ed. Boorstin and Kelly, 1992, Prentice Hall) I was intrigued by "Giap Remembers" (pp.134-136), an excerpt from Stanley Karnow's interview about the Vietnam War. Vietnamese Communist Commander, General Vo Nguyen Giap stated that the communists were prepared to fight


Another twenty years, even a hundred years, as long as it took to win, regardless of cost....One of his aides confided to me that at least a million of their troops perished...

Karnow rationalizes Giap's fanaticism by comparing the Vietnamese carnage to that in World War II. The Vietnamese Communists were no worse than the perpetrators of the Holocaust or Hiroshima he infers. This view is complete nonsense. We labeled the bloodthirsty dictators, Hitler and Stalin, as evil because they and their ideologies did not value human life. We dropped the atomic bomb in order to save American (and Japanese) lives. We could only win the Vietnam war if we were prepared to sacrifice lives like Giap. And we were not.

Kennedy was not the best of presidents, but he embodied a can-do optimism and sense of purpose. Communist totalitarianism could be successfully opposed without nuclear war; brotherly love could be shared through attempting to pass civil rights legislation and by the founding of the Peace Corps; and the moon could be explored through a space program. We could use a bit of that optimism and purpose today.
Posted by Teaching High School at 12:45 PM

Teacher by Day, Drummer by Night

Please recommend this blog to others

Support my research and writing by downloading my music